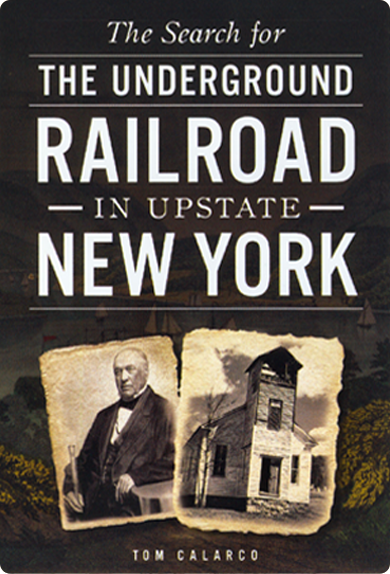 The Search for the Underground Railroad in Upstate New York

This is Tom’s first-person account of how he became involved in researching the UGRR in 1991, and the many individuals who assisted his research. It tells the story of how his research led to the discovery of the Stephen and Harriet Myers Residence museum and the rediscovery of forgotten abolitionist, Rev. Abel Brown, among others.

Due to its secretive nature, much of the Underground Railroad’s history is still shrouded in mystery; in fact, some historians have even questioned its significance. After decades of investigation, Tom Calarco shares his experiences in his book, The Search for the Underground Railroad in Upstate New York, gathering proof to support the legend’s local oral history in upstate New York. As the Civil War loomed and leaders from the North and South debated the future of slavery, brave New Yorkers risked their lives to assist fugitive slaves.

Both whites and blacks collaborated on the Underground Railroad while employing clever strategies to avoid the slave owner and bounty hunter. Conscientious locals increased their attempts to help fugitives reach Canada, particularly after the Fugitive Slave Act was passed. Join Calarco on this exploration of one of the most honorable endeavors in American history.