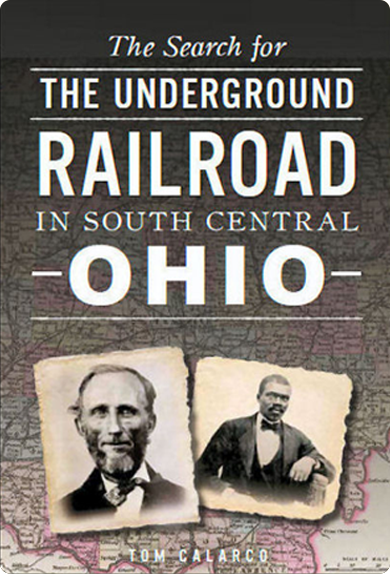 The Search for the Underground Railroad in South Central Ohio

This book details the efforts and tells the stories of the many neglected individuals who participated in the Underground Railroad in the rural sections of south-central Ohio. It only mentions in passing the noted sites and conductors in Cincinnati and Ripley in its effort to bring attention to those who have so far been neglected by history, including individuals like Abram Allen and his Liberator wagon, Valentine Nicholson, Udney Hyde, William Cratty, and the Butterworth and Benedict families. A reader of this book wrote in his review: “Terrific book. Everyone who is in central and southern Ohio must read this as well as all who are interested in the underground railroad.”

The Underground Railroad is still one of America’s most inspirational true stories, and the citizens of Ohio contributed to this noble effort. James Gilliland, a Presbyterian minister in South Carolina, fled his home after experiencing a moral crisis and relocated to Red Oak, where he became one of the state’s most early and influential abolitionists.

Richard Dillingham of Peru Township lost his life helping the slaves escape slavery. Three generations of the Benedict family in Alum Creek took the same risks with their lives. Many fugitives were transported to safety by Clinton County Quakers Jane and Valentine Nicholson as well as Wilmington Quaker Abraham Allen and his dependable Liberator wagon. Author Tom Calarco reveals the true stories of our country’s struggle for equality and freedom for all in his book, The Search for the Underground Railroad in South Central Ohio, by drawing on decades of research.