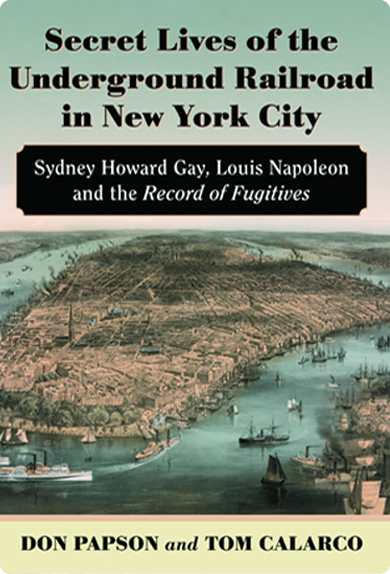 Secret Lives of the Underground Railroad in New York City

This book has an interesting genesis. I didn’t intend to write it, but I discovered that the Sidney Howard Gay notebooks recording his aid to fugitive slaves from 1855-to-1856 were at Columbia University. They were referenced in a study by one of my contributors to Places of the Underground Railroad, Kathryn Grover. I contacted her as to what was in them, but she only had a vague recollection. My suspicion was that the notebooks could be goldmine of information, like Abel Brown’s memoir. I had them copied and mailed to me, and my suspicion was right. About the same time, a grad assistant of noted American antebellum scholar Eric Foner also discovered their significance.

To make a long story short, Foner as well as Don Papson and I wrote our own books about the notebooks, Foner’s coming out shortly before ours. Ours has the verbatim transliteration of the notebooks amd appendices tracing the journeys of the more than 254 fugitives aided by Gay and Louis Napoleon as well as several excellent maps of the Underground Railroad around NYC and the Northeast and Mid-Atlantic regions.

“This book is a must-have for researchers, genealogists, students, teachers, and general readers interested in this dramatic period in our nation’s history!” ― Kate Larson, author of Bound For the Promised Land: Harriet Tubman, Portrait of an American Hero.

Sydney Howard Gay collaborated with some of the most significant underground agents in the eastern United States while serving as editor of the National Anti-Slavery Standard for the American Anti-Slavery Society in New York City for fourteen years, including Thomas Garrett, William Still, and James Miller McKim. Louis Napoleon, a free black man who was intimately involved in the James Kirk and Lemmon cases, was Gay’s closest associate. Gay kept a list of the fugitives that he and Napoleon assisted for more than two years. In this book, Secret Lives of the Underground Railroad in New York City, these previously unpublished records are annotated.

Secret Lives of the Underground Railroad in New York City reveals how Gay became involved in the bitter conflict between Frederick Douglass and William Lloyd Garrison, illustrating the varying personal opinions that divided abolitionists. It explains the vast network of black and white men and women who served as key linkages on the Underground Railroad, clearly repeating a daily reality.