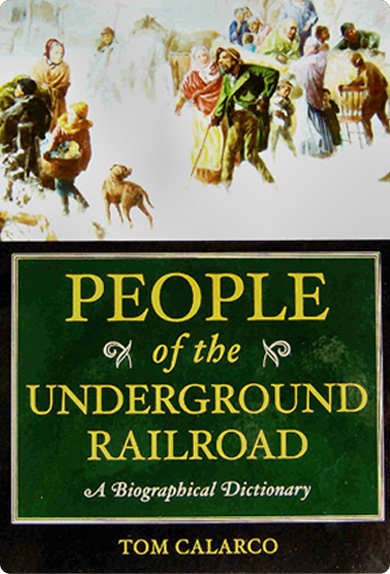 People of the Underground Railroad by Kate Clifford

Tom’s biographies of 100 important individuals involved in the Underground Railroad. Included are sidebars of others who were equally important but who were left out because of lack of space and other information important to the understanding of the Underground Railroad. Individual entries include those by noted authors, Kate Clifford Larson on Harriet Tubman, and Scott Christianson on Charles Nalle. A noted feature is two indexes, one comprehensive, and the other, an index to people and places identified in the book as participating in the UGRR

One of the best-known conductors of the Underground Railroad, Harriet Tubman is best remembered for this role. She earned the biblical name “Moses” as a result of her successful, secret expeditions into Maryland in the 1850s to free enslaved women, men, and children, which helped to immortalize her in the eyes of Americans and people all over the world for more than 150 years. Born into slavery on Maryland’s Eastern Shore, Harriet Tubman rose to prominence internationally throughout her lifetime as an operator of the Underground Railroad, abolitionist, spy and nurse during the American Civil War, suffragist, and humanitarian.

After escaping slavery in 1849, inspired by her love of her family, freedom, community, and faith, Tubman spent the rest of her long life fighting for liberty and equality, earning her a place among the country’s most well-known historical leaders.

People of the Underground Railroad by Kate Clifford portrays Tubman as a multifaceted woman who was smart, shrewd, extremely religious, and passionate in her pursuit of liberation by using various new primary sources, unexplored archives, and significant genealogy research. Tubman was born a slave on Maryland’s Eastern Shore but refused to live in bondage. She is a descendant of the matrilineal, vibrant Asanti people of the West African Gold Coast. She set out on a risky journey of self-liberation when she was still a young lady, and after achieving that freedom, she frequently returned to free much-loved family members and friends by using the Underground Railroad.