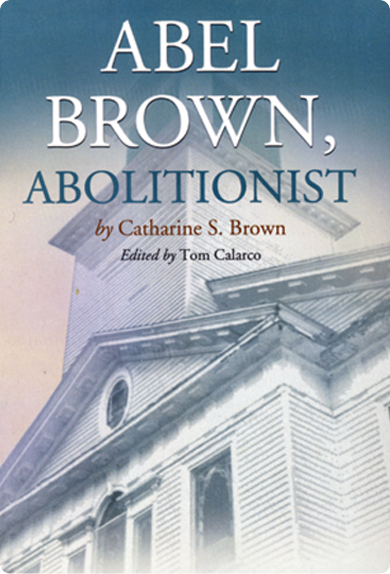 Tom’s annotated edition of the almost forgotten 1849 memoir of abolitionist, Rev. Abel Brown, which was published by Brown’s widow rediscovered during his research in 1998 while rummaging through the fragile copies of the old Liberty Party paper, The Albany Patriot, at the New York State Library. The book’s contents opened a treasure trove of information that broke open a great deal of information that had been lost to historians about the Underground Railroad in the Adirondacks and the Albany area. In his annotation, Tom reveals the background of many of the individuals who collaborated with Brown in the Underground Railroad. He also relates the serendipitous occurrences that led not only to the rediscovery of the memoir, but also to the discovery of Brown’s gravesite

Abel Brown was born on November 9, 1810, in Springfield, Massachusetts. When he was eleven years old, his parents moved the family to New York State. He joined the Christian ministry as a young man and quickly felt the urge to get involved in the abolitionist movement. In addition to writing letters and reports for his own newspaper, The Tocsin of Liberty (later The Albany Patriot), Abel Brown, Abolitionist also published reports and letters in The Liberator and other publications with abolitionist leanings. As the Eastern New York Anti-Slavery Society’s founder and corresponding secretary, he traveled far, preaching the abolitionist message, often accompanied by runaway slaves.

The abolitionist movement in New York was devastated by Brown’s passing one day before his 34th birthday, and his wife Catharine suffered a great loss. Catharine decided to preserve her husband’s legacy by writing this biography in 1849. In order to present the story in his own words, the book largely draws on Abel Brown’s correspondence, journals, and newspaper articles. The 1849 original is preserved in this recently updated version, which also provides context and clarification. The consequence is a rare first-hand view of America’s anti-slavery campaign. The sermons and other correspondence by Abel Brown, Abolitionist, are excerpted in the appendices.